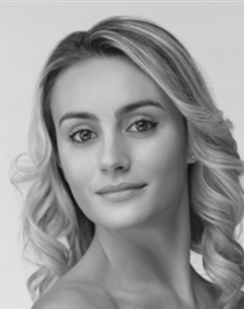 Giorgia Picano Is originally from Formia, Italy. She began dancing at a very early age at ”Centro Art Studio” and began her professional training at the age of 19 at ”École Supérieure de Danse Jazz” in Nice, France, where she graduated in 2019.  Giorgia has performed works by Serge Alzetta and Genevieve Blanchard, touring in Italy and France with ”AEDJ Group” and ”Les Ballets Serge Alzetta”. When in France she also received the EAT diploma and AEDJ diploma. She was awarded a scholarship to attend a Summer Intensive by the choreographer Alex Atzewi, and she attended several intensive programs directed by Alessandro Rende, with internationally renowned teachers and choreographers. In 2019 she moved to New York City to train in the Scholarship Program at The Ailey School. At Ailey, she has had the opportunity to perform works by Jessica Castro and, as a part of the Ailey Student Performance Group, works by Patrick Coker, Hollie Wright, Amy Hall Garner, and excerpts of Alvin Ailey’s Repertory. She completed her studies at Ailey in May 2022. She is currently dancing in New York with Benjamin Briones Ballet, Hanna Q dance Company and Salvatore Larussa Dance Theater.